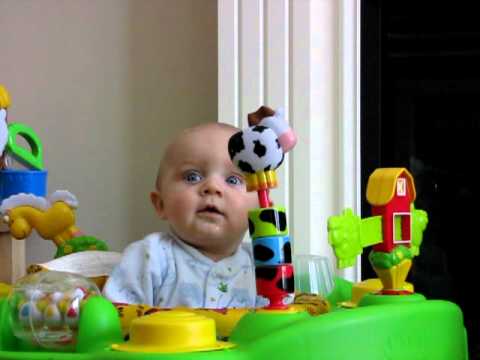 Reflexes, we learned in a recent post, are involuntary movements elicited by an outside stimulus.  In this video posted on youtube (mandkyeo’s Channel), the sound of Emerson’s mother blowing her nose triggers his startle reflex.  Emerson quickly flexes (bends) his elbows and shoulders, pulling his arms toward his body.  His eyes widen and he stiffens his back as he quickly moves his body backward, away from the loud sound.  Soon, he relaxes his eyes and face just before bursting out in laughter….only to be startled once again by that loud and scary sound coming from mommy’s nose!  The pattern repeats itself once again: startling followed by laughing.  This video gives us the chance to see the vulnerability of the startle position.  The arms are bent with fists clenched and held close to the torso as baby moves quickly and abruptly away from the sound.  The opposite of this would be moving toward the sound by reaching, leaning and stepping forward.  This would be a posture of interaction or confrontation with the threat.  This is one of a series of Stellar Caterpillar posts examining the reflexes evident in baby’s first year.

This entry was posted in OTHER and tagged reflexes. Bookmark the permalink.