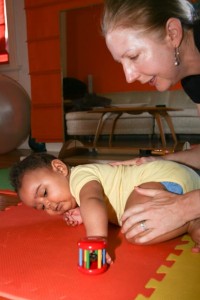 BABY MILESTONE OF ROLLING FROM BACK TO BELLY

One of the early motor skills baby learns is rolling.  This skill can be discussed by breaking it down into moving from the back to the belly, from the belly to the back, and the connection of those two into one full log roll all the way around to the starting position.  For this post, we will look at the movement from the back to the belly.  There are a few ways to initiate every skill, and we are examining the various possibilities for initiating this new skill.

BABY LEARNS TO ROLL BY MOVING HER LEG

When asking the question, “How can I teach baby to roll,” consider observing how babies begin the movement.  One of the popular ways that a baby begins to roll is bending up one leg toward his chest and then moving it to the side.  The leg is connected to the pelvis at the hip joint, which is one of the heaviest bones in the body.  As the leg moves far enough out to the side, the pelvis tilts and soon the weight of the pelvis takes baby onto her side and into the motor skill of rolling.  (See photo above.)  Baby learns this skill as she is lying on the floor kicking and moving her legs around.  The movement is just an exploration, an improvisation, and suddenly she moves one leg far enough to the side that she is pulled onto her stomach.  It was an accident! She was not intending to roll, it just happened.  What a wonderful discovery for her.  She figures out how to repeat it many times so it becomes an skill and not just an accident.

BABY LEARNS TO ROLL BY MOVING HER ARM

Mastering the motor skill of grasping and reaching is integral to the motor skill development of rolling.  Often the roll is initiated by a reaching action.  That is a reaching action with the intention to grasp something, usually a toy.  The arm is connected to the torso or ribcage at the shoulder joint.  When baby reaches her arm across her body, the ribcage begins to move and she tips into the beginning of a roll.  Often the arm and the leg on the same side of the body will move a the same time and in the same direction to facilitate the baby turning onto her tummy.  Some babies develop a habit of quickly pulling their arm back to the side when they begin to move because they are a bit startled.  When they pull the arm quickly back to their side they roll back onto their back.  The pulling action of the arm backward pushes the ribcage backward and baby rolls onto her back again.  By placing a toy nearby, baby now has an intention to grasp something and is less likely to pull the arm backward.  Providing the motivation for the action is always key.  She wants that toy!

BABY LEARNS TO ROLL BY MOVING HER HEAD

Another possible initiation of the skill of rolling occurs when baby is on her back and someone is sitting up above her head.  In order to see them, she rolls her head to one side and then looks up a bit toward the person.  This action shifts her weight just enough in her torso that she can roll onto her side from here quite easily.  This movement of initiating the roll with her head often involves the action of reaching as well.  This pattern often evolves out of baby’s curiosity to see something that is located behind her.  Read more on the skill of rolling by clicking on one of our posts below:

This entry was posted in ROLLING and tagged 3-6 months, anatomy. Bookmark the permalink.