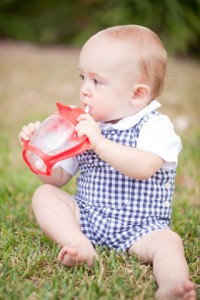 Several month ago I was watching Shark Tank, one of my favorite TV shows that provides entrepreneurs with the opportunity to pitch their idea for a business or product to a group of venture capitalists.  If they are fortunate, they leave the tank with an investment.  One of the baby products pitched on the show that received an investment is Lollacup.  The husband and wife team who developed Lollacup excitedly observed their daughter drinking from a straw at the age of 9-months-old.  Their pediatrician recommended weaning her to a straw cup rather than a traditional sippy cup.  However, the liquid in these cups would always sink to the bottom of the cup while the straw would float up to the top.  The clever parents saw an opportunity to create a new and improved sippy cup and that is when they created Lollacup.  Lollacup is a sippy cup with a weighted straw so the straw sinks to the bottom of the cup with the liquid.  This cup makes it possible for baby to drink out of a cup with a straw, even when the cup is tilted.  The twist off handles make it possible to place the cup into a diaper bag side pocket for moms and babies on the go.  Lollacup is also made in the USA of BPA-free and phthalate-free materials and sports an adorable bird design that babies love.

DRINKING WITH A STRAW AND MOTOR SKILLS

Lollacup is the perfect cup to teach baby to drink through a straw.  The action of drinking with a straw is beneficial for both babies and adults.  Why?  Because the action of sucking uses the sphincter or ring muscles in the body.  When we use one ring muscle it activates all of the ring muscles.  This action of sucking is familiar to baby since this has been her technique for eating food from the bottle or breast.  The action of toning all of the ring muscles can be soothing because they feel it through their entire body, and this why babies feel comforted when they use pacifiers.  Sucking also uses more muscular action than a sippy cup, which is beneficial for speech development.  Make the sound of the letter “O.”  Exaggerate the sound, “OOOOOO.”  You make the same round shape with your mouth that you do with the action of sucking through a straw.

THE SIPPY CUP AND BABY POSTURE

In order to drink from the Lollacup or an ordinary sippy cup baby sits with good posture.  This is one of the differences between drinking from a bottle and drinking from a sippy cup.  Baby can still recline when using a bottle.  It is more difficult to recline with a cup.  At around 9 months old, the next step in the development of a baby is drinking in the upright posture.  When  baby holds the handles on a Lollacup or sippy cup, he connects his arms into his spine.  He coordinates his arms, hands, mouth, and torso as he moves the cup up toward his mouth to take a drink.  Observe the baby’s posture in the above photo.  He needs to sit up with good posture to drink from the cup, and holding the handles enables him to do so.

This entry was posted in EATING, PRODUCTS & GEAR and tagged 9-12 months, diet, green. Bookmark the permalink.