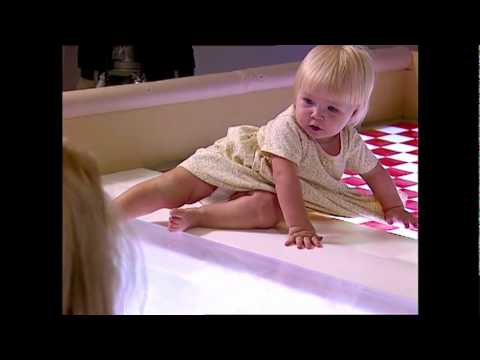 WHAT IS “SOCIAL REFERENCING?”

As a baby develops motor skills of crawling and walking that allow her to move around and explore,  she soon begins to look back at mom to see if it is OK to play with unfamiliar objects or to go around new corners.  In child development this behavior of looking back to a parent to see if something new or unfamiliar is OK is called “social referencing.”  Babies and children look to the adults they trust to provide them with clues to safely guide their explorations.  The clues often come from the parent’s non-verbal behavior, in particular the facial expression.

Joseph Campos of the University of California at Berkeley conducted the now classic baby experiment that investigated the role of facial expressions in providing infants with the clues of whether or not to proceed when faced with the unfamiliar.      Using an experimental strategy developed in the 1950s called the Visual Cliff, he created a situation that was unfamiliar and somewhat frightening for the babies.  Infants between 9 and 12 months are placed one at a time on a plexiglass table with a checkered pattern.  In the middle of the table is a visual drop off which is created by replacing the checkered pattern table top with a strip of clear plexiglass.  This created the appearance of a sudden drop in the table although the surface is completely uninterrupted.  The baby is placed on one side of the table while the mother stands on the other side while holding an appealing toy.  When the baby crawls to the center strip where the drop off appears, they sense they change and the potential danger.  They look to their mother to see what to do.

Parenting tips learned from this experiment include being clear to make an encouraging face when you child is trying something new that is positive and safe and making a fear face when the child is considering an action not desired or dangerous.    Spend some time looking in the mirror and exaggerating these facial expressions so they become very obvious.  Observe your baby to see when she looks to you as if to ask, “Is this OK?”  Provide clear clues for your baby as she explores the world around her.  This gives baby confidence to explore, play with a new object, by held by an unfamiliar relative visiting from out of town, and more.

This entry was posted in BABY RESEARCH and tagged 9-12 months, confidence, support. Bookmark the permalink.