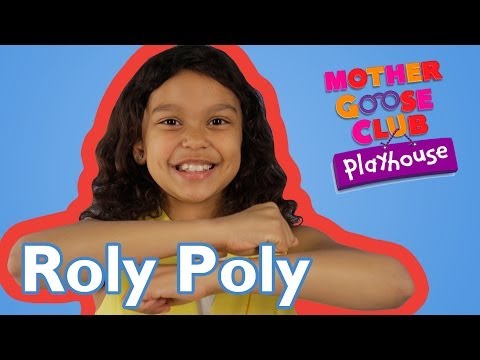 As babies become more skilled with their movements, we can begin to teach them concepts regarding spatial orientation.  These concepts are more easily learned when taught in context with their opposites.  For example, it is easier to grasp the meaning of “up” when it is learned with “down,” or “inside” when learned with “outside,” and “hot” when learned with “cold.”  When the differences between two words (what they represent) is enormous, it is easier to understand.  The nursery rhyme “Roly Poly” is a classic song for teaching babies and toddlers the concepts of a few “opposites.”

“Roly Poly” is also an excellent song for speech development in babies because most of the words repeat in patterns of three, making it easier for baby to try and grasp the pronunciation.  These words are short, “Up,” “Down,” “In,” “Out,” and “Clap.”   Watch the above video from Mother Goose Club’s youtube channel.  The young girl demonstrates arm movements along with the rhyme, and you can try these movements with baby’s arms.  You may want to avoid trying to put her hands behind her back, though.  She also demonstrates very clear articulation of the words by exaggerating them with her mouth and lips.  This helps baby learn how to speak.  Try exaggerating the movements of your mouth as you speak the rhyme with baby.  Your face will be close to hers as you move her arms, so she can see how you are creating these interesting sounds.

Hands Behind Your Back.

This entry was posted in GAMES FOR BABY and tagged 6-9 months, 9-12 months, play. Bookmark the permalink.