tips for baby development of the hand and grip: grasping 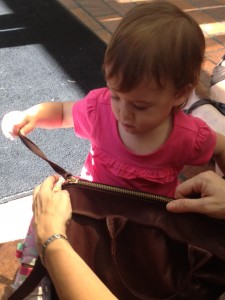 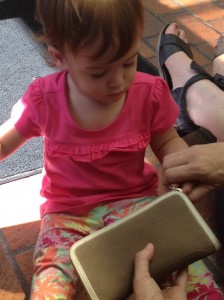 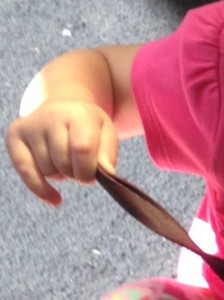 For babies who have learned to use their pincer grasp, a fun game for them is to learn to pull a zipper.  The development of the pincer grasp is strengthened when baby needs to hold an item, such as a zipper pull, between her thumb and first finger as she moves it.  A zipper on a purse, a wallet, a cosmetic bag, or your jacket are fun for her to learn to manipulate.     Try holding the ends of the zipper for her at first, so she can pull the zipper and learn how it works.  Soon, on a smaller item such as a cosmetic bag or wallet, she can hold the item steady with one hand while unzipping the zipper with her other hand.  She may even need you to show her how to hold the zipper pull with her thumb and first index finger (pincer grasp). Look closely at her hand to observe how she is developing her fine motor skills.

Always closely supervise baby as she opens a purse or wallet that may contain items that are not baby-proof, such as coins, paperclips, pens, and other small or sharp objects.  You may want to find a purse and place interesting and baby-proofed items inside for her to discover when she successfully unzips the purse.  She will enjoy the process of discovering the same items are in the bag each time she opens it.  Another dimension of fun for speech development is added if you say “ZIP-ZIP-ZIP” or “ZIP-PER” each time you move the zipper pull to open or close the zipper.  They are intrigued by the sound of the word and will watch you say it each time. 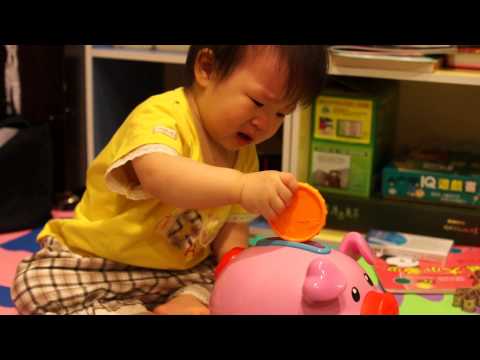 Babies love to put coins in a piggy bank.  This is an advanced skill that falls into the motor skill of grasping and reaching.  It actually grasping, reaching, and letting go.  Baby learns to pick up a coin, reach it into the bank or coin slot, and then opens her fingers to let it go.  Sometimes babies learn to put the coin into the slot but do not know yet how to let it go.  When a baby reaches out to get a toy she must both reach with her arm and grasp with her hand.  To place an object into a box or a coin into a slot she must take the object she is grasping (i.e., coin) and reach it into the slot and then let go of the grasp (open her fingers).  The 13 month old baby in the above video from Jerry You’s youtube channel has learned this skill quite well.  The baby tires at one point and asks the mother to do it for her.  The mother gently tells the baby to go ahead and do it herself.  The piggy bank provides babies such as the one in the video much time for baby play.

Simple piggy banks can be made at home with everyday objects.  An empty water bottle is often used in large mommy and me classes.  The opening fits a penny easily.  Just place the coin in the narrow opening at the top and watch it fall down to the bottom.  Another option is to use an empty carton from something such as milk.  A lid can be made from a paper plate which is cut to size and has a large slot cut out of it. Tape this to the top of the carton and sit it on the ground while baby puts coins into the opening.  When traveling, on vacation, at the museum, etc., show baby how to drop coins into a fountain or the donation box near the exit.  Pay close attention so the coins do not go into her mouth! 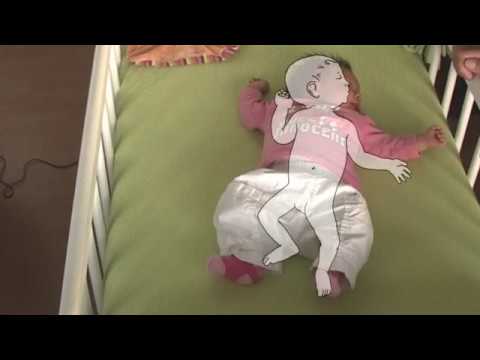 BABY MILESTONES AND THE “FENCING REFLEX”

One of the most visible infant reflexes is the Asymmetric Tonic Neck Reflex (ATNR). Usually visible in up to six month old babies, this reflex is often called the “fencing reflex” because the movements of the arms reflect the stance of someone engaged in the sport of fencing.  Although there is also some movement in baby’s legs with this reflex, the action is more evident in the arms and head.  Some researchers suggest that one of the purposes of certain infant reflexes is the preparation for motor skill activities while others seem to be survival oriented.  What are the baby milestones that the ATNR Reflex is facilitating?

Watch the above video from betapicts’ youtube channel to see the coordination of this baby reflex in slow motion through an illustration of a baby and then on an actual baby.  The reflex is most easily observed by watching the movement of the head and arms.  With the ATNR reflex present, baby’s arm straightens (extends) on the side at which her head is pointing while the opposite arm bends (flexes).  Since reflexes are involuntary coordinations or movements, baby has no control over this movement.  Everytime she turns her head to the right the right arm straightens and the left arm bends.  This baby reflex will usually disappear from your observant eye by around four to six months of age.  Some suggest this reflex may stimulate eye-hand coordination because one hand moves directly in front of the face.

Child Development researcher and author Sally Goddard discusses the presence of the ATNR reflex while baby is in the womb.  In her book “Reflexes, Learning, and Behavior:  A Window Into The Child’s Mind,”  Goddard explains that this reflex is responsible for much of baby’s movement in utero which facilitates the motor skill of balance as well as important developmental neural connections.

ATNR AND THE MOTOR SKILL OF GRASPING AND REACHING

The ATNR-like movements visible during the pregnancy ultrasound exams are the beginnings of the neural connections that evolve into the motor skill of grasping and reaching.  The movements of the tiny arms bending and straightening as the head turns from side to side are rehearsing one of the first motor skills baby learns.  According to neurobiologist Lise Eliot, arm movements appear at about seven weeks post conception.  Although there is much to develop with the motor skill of grasping and reaching during the first few months after birth, the early neural connections for this skill trace back to the beginnings of the ATNR reflex in the womb.

BABY RATTLES: HOW TO INTRODUCE A RATTLE 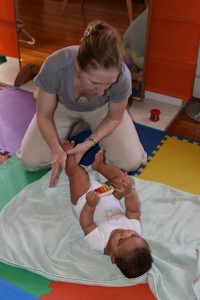 One of the first motor skills developed during baby’s first year is grasping and reaching.  It develops quite quickly as baby sees objects that interest her.  Her curiosity motivates her to reach out and grab the object to explore it with her own hands.  She likes to see if she can create the sound she hears when mom shakes the rattle.  She uses her arm to shake the toy and she touches the colorful pieces with her fingers.  Parents quickly accumulate a collection of baby rattles and toys to provide entertainment for baby.  One interesting toy can keep baby busy for quite awhile.  The rattles reflect a variety of stimulating features:  bright colors, soft fabric, moving parts, ringing bells, swishing sand, animal faces, and much more.  There is no limit to the market of imaginative and entertaining baby toys.

Often a caregiver holds out a toy for baby and quickly shakes it a few times and then watches to see if baby immediately grabs it.  When it appears that baby hesitates, the parent or nanny rejects the toy and offers a new one. He or she often thinks: “You don’t like this one, how about this one?  Or this one?”  This cycle repeats a few times until the parent or nanny gives up and just sets a toy next to baby.  This pattern reflects how fast-paced our society is today and how quickly adults process information with our hands and eyes.  It is important to remember that baby is still learning to see objects and to coordinate her body actions.  It takes time for baby to see the object, focus on it, and to develop an interest in it.  This process takes time.  Only when she is curious about the baby rattle will she develop the motivation to reach out and grasp it.   Give her time.

3 TIPS FOR INTRODUCING A BABY RATTLE TO AN INFANT

DEVELOPMENT OF A BABY: BABY POSTURE 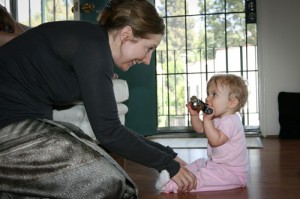 Madison, age 7 months, demonstrates one of the advantages of excellent posture.  It is easy for her to grab objects and play with them and bring them to her mouth while sitting up.   One of the most commonly searched developmental phrases on google is, “baby sits with curved back.”  This is because many parents do not understand how to teach baby to sit.  Babies do not learn perfect posture from being put in the sitting position at a young age.  They have not developed the strength in their muscles and bones to hold the position so they collapse into a rounded back.  Their parent often sits behind them with a hand close to baby’s back to catch her when she falls.

To learn how to teach your baby to have beautiful posture, please read our posts on the topic (see links below).  Through understanding how to strengthen the back and neck muscles and understanding that this process takes time, your baby will learn to sit up straight, too.  Most important is to learn patience.  Madison did not sit up until recently because it takes time to strengthen her bones and muscles.  When she sat up for the first time, she had perfect posture.  This is the experience of our Stellar Caterpillar students!

Posted in GRASPING & REACHING, OTHER 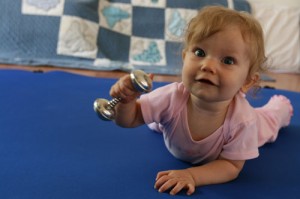 A CLASSIC RATTLE IS POPULAR FOR YEARS

What makes something a “classic”?  We all know “classic” cars, movies, toys, furniture, and sodas– Ford Thunderbird, Casablanca, Etch-A-Sketch, and the Eames desk chair.  According to yahooanswers.com, the term “classic” is used to describe something over 25 years old and still popular.  This definitely describes the silver dumbell rattle in the above photos.  Suitable as a baby’s first rattle and yet still a favorite choice by a seven month old baby (as in the photos above), this rattle has been popular for many years.  Upon seeing this classic baby toy during one of my Stellar Caterpillar lessons, many grandmothers  comment, “I used to use one of those rattles with my children!”

In the field of design there is one important principle that prevails.  This is the understanding that excellent design should not only be attractive to look at, but also must function extremely well.  We know that the dumbell design of the rattle is pleasing to look at as it is used in probably every fitness gym for the strength training weights, and has been for many years.  They come in several sets of varying sizes which means different weights.  For baby, the design of this rattle is excellent for motor skill development.  You can read our post “Best Baby Rattles” to learn more about rattles and motor skill development in infants.