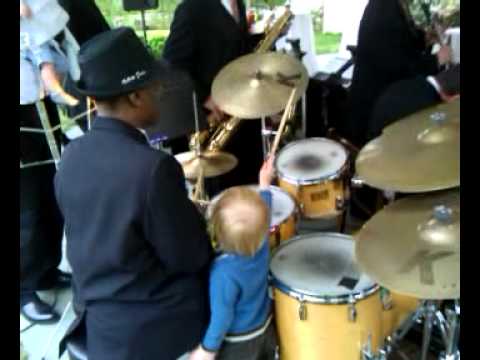 Ivan, the first of our stellar caterpillars, is our “North Star.”  Ivan received his first lesson at four weeks of age and continued lessons until he walked on his own at twelve months. At six weeks Ivan learned to hold and shake a rattle.  This tiny yellow maraca swishing around made its quick sounds from grains of sand inside.  Swish-swish-swish, a smile grew bigger on Ivan’s face, swish-swish-swish.  At each successive lesson, when Ivan began to cry, his attention could quickly be recaptured by shaking a rattle with an interesting sound.  We played with several different rattles:  one made the swish of grains of sand, another the ding of a bell, yet another the jingle of several bells, and one the percussive chop of wood.

Babies respond to novelty, especially with sound.  Think “new, different, unusual” when choosing rattles.  The variations stimulate their curiosity and catch their attention.  And, when they shake the rattle, they enjoy the feeling that they can create this unusual sound that they hear!  The sound also helps the baby to learn where his hand is in space.  The ability to know and feel “Now my hand is close to my face,” or “Now my hand is close to my chest,” is facilitated by the sound of the object and the feeling of the object touching his face or chest.  This skill is called proprioception.  Proprioception is defined as the ability to sense oneself in space, or to feel a part of the body in space.  This can be the location, position, movement, and orientation of the body as a whole, or of the body part.  In this example we are talking about the baby learning proprioception of his arm and hand.  The baby both hears and feels his hand is close to his face when he simultaneously hears the bell jingle and the feels the bop on his nose.  A rattle that makes a sound offers a very important clue to the baby as he is learning this coordination.

Ivan’s curiosity with sound continues today as he taps around on his first drum set, or on the drums of another musician.  Recently, while attending a wedding with his parents, Ivan caught sight of the drummer and walked up very close to him and stood, carefully watching him play.  Soon, the drummer stepped aside and let Ivan “sit in” on the next song.  Ivan moved his drumstick from one drum to the next to the cymbal….exploring how many different sounds he could make!  Our North Star leads the way!

This entry was posted in GRASPING & REACHING, RATTLES and tagged coordination, curiosity, hearing. Bookmark the permalink.

One Response to PROPRIOCEPTION: HAND AND ARM COORDINATION