BABY KICKING: ONE LEG ONLY

Madison’s star is bound for the Chorus Line! 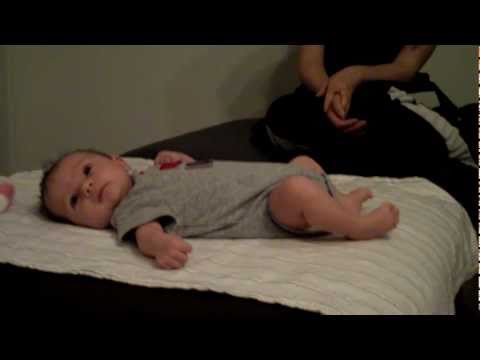 PROPRIOCEPTION OF THE LEGS

Madison received her second lesson at 5 weeks.  Her parents set her on the table with her eyes closed, legs bent up in a frog-like position, and fists close to her mouth.  She was very happy to continue sleeping as I began to work with her. Occasionally, she would stretch her legs, move her arms and head, then return to her frog-like sleeping position.  Madison is a very good sleeper.  I began to develop her proprioception by tapping and gently squeezing each part of her legs – first her thighs, then her calfs, then her feet.  This helps her to feel these parts of her body more clearly.  The definition of proprioception discusses the many cell receptors that give us information about our body and are located in our skin, muscles, ligaments, and joints. Tap, tap, tap….tap, tap tap.   Madison continued sleeping with an occasional stretch.  Next, I moved her legs, one at a time, through the pathway of flexion and extension: I showed her that her leg can move toward her chest (flexion) and away from her chest (extension).  I moved her legs very slowly so she could feel what they were doing.  She was now a little bit awake…opening and closing her eyes.  We continued this movement for a few minutes longer.

THE CONNECTION IN THE BRAIN

After introducing a few other movement ideas to Madison, we put her down on the table to rest.  By now her big beautiful eyes were open wide, taking in the bright lights in the room.  All of a sudden we saw her start to kick her right leg – right-right-right-right-right!  She had just learned to kick for the very first time.  She connected more to the feeling of the right leg, so she continued to explore that feeling.  We watched Madison kick with quite a surprising amount of strength, over and over again, bend-straight-bend-straight-bend-straight. We were observing the brain making the connections necessary to do a new movement.  Through our proprioceptive tips, we merely provided a few clues and the brain did the rest.  Since this movement was completely new, Madison focused on one singular sensation – kicking only the right leg.  In the next day or two, she will discover that she can kick her left leg, and play with that movement as if it were a new toy.  Then, over the next week or two, she will learn to kick both legs, alternating right and left. Kicking the legs builds strength and introduces some coordination when both legs are moving.  She enjoyed kicking her right leg for quite a while, even attempting to continue kicking while placed in her car seat to return home. Madison appeared very pleased with herself.  So were her parents and her teacher.

This entry was posted in KICKING and tagged 1-3 months, coordination, strength. Bookmark the permalink.

2 Responses to BABY KICKING: ONE LEG ONLY