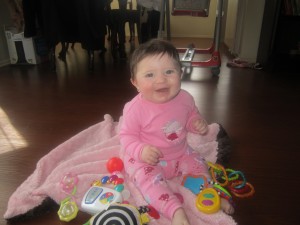 Baby Rochel began Stellar Caterpillar lessons when she was just a few months old.  Her favorite part of the lessons were the proprioception exercises.  These are the exercises where we squeeze various parts of the body as we say the name of that body part.  For example, while squeezing her leg I would say, “Rochel, this is your leg.”  Her mother practiced these exercises with her everyday.  They are a fun game for babies.  For babies, these exercises are similar to the feeling they get when being swaddled with fabric.  The firm yet gentle pressure of your hands on their body feels secure just like the feeling of the swaddling cloth when it is pressing against their body.  Rochel’s favorite body parts to identify through touch were her ribs and her toes.

Today Rochel is three years old and attends preschool.  I had the chance to talk with her mother recently and she proudly told me a story about Rochel.  “Last week at preschool, Rochel fell down.  The teacher asked her is she was OK and Rochel told her that her “ribs hurt.”  The teacher asked me, “How does 3-year-old Rochel even know she has ribs?”  I explained to her that we learned exercises to do with her when she was a baby that taught her the names of her body parts.”  Most 3-year -olds would refer to the area of the ribs as their “side” or just say “it hurts here” as they touch it.  To identify the ribs by name shows quite a bit of learning.  This is why Rochel is one of our superstars!!!

Even though babies may not be able to speak yet, they can learn far more than we can understand.  Through the use of the sense of touch, the spoken name of the body part, and with repetition, Rochel and many other babies develop a very clear awareness of their body and the names of their body parts.  The development of body awareness is an important part of motor skill development.  Through these exercises, many babies can develop a strong sense of body awareness just like Rochel.

How do babies learn to talk?  One way is through hearing songs. When a baby hears a song frequently she becomes familiar with patterns such as word groupings.  When the pattern repeats within the song and then the song repeats, baby has the chance to learn pieces of the song.  As infants near their first birthday they are learning to sing a few words to their favorite song.  “Twinkle twinkle little star” is one of the favorites.  As baby nears the age of two she is beginning to learn the alphabet through the “ABC Song.”  Sometimes parents have songs they love and they introduce them to baby as well.  In the a video from HoundDogBillie’s youtube channel, watch 21 month old Ella Mae sings “An American Trilogy” by Elvis Presley.   Elvis’ music is not typical song material sung to babies, but this song’s slow melody makes it easy for baby to follow and with repetition it is a wonderful learning experience.

Listening to a tune frequently teaches baby to hear the accented musical moments in the song.  Babies and toddlers try and join in to their favorite moments such as a musical crescendo through the movements of their body forward and backward or the movements of their arm in time with the music.  In the above video, Ella”conducts” a crashing musical moment with her arm moving up and down perfectly timed with the music.  She also joins in with other accented moments with her head moving forward and backward or side to side in perfect time.  The first musical instrument baby learns to play is her own body through the use of her voice and the accompaniment of her head, torso or arms to the music.  Later she will learn to play actual instruments as extensions of her limbs, such as the triangle, tambourine, xylophone, or piano.

SING TO BABY IN THE CAR

One of my favorite tips for parents is to sing to baby in the car and sing the same songs so she can learn them and try to join in.  This video is a beautiful example of what can develop over time with that kind of patience and persistence.  You may get bored with the song, but not your baby who is learning speech.  The repetition brings her much joy when she can join in on some of the fun that she is hearing.  Many parents have found that baby stops fussing in the car when they begin singing.  Songs are also a way that baby can continue to engage with you when you are driving and she is stuck facing away from you in her carseat.  She can focus on what she is hearing as well as continue her connection with you.

Mastering motor milestones during baby’s first year leads to conquering the dance floor in year two, as little William demonstrates in the above video from Studie43′s youtube channel.  While at a dance hall event he seizes the opportunity to jive solo on the dance floor to the hit “Jailhouse Rock.”  Watch closely to see all of the details he picked up while watching his parents rehearse earlier.  William knows to stay in one place at times and other times to travel around the floor.  He knows to bend his knees and change levels.  He occasionally throws in a good jump.  William moves his arms from his powerful elbows and finds expression even in the movements of his fingertips.  At the end he enjoys taking a bow which is followed by brushing his hands as if thinking “Well done!”  This is a great example of a toddler who has developed a strong self-image by skillfully developing his coordination, stability, and strength by conquering the motor milestones of infancy.  We call these toddlers “Superstars!”

Dictionary.com defines the word “skill” as ” with expertness” or “dexterity.”   Babies learn their motor skills with various degrees of aptitude.  With some gentle guidance and when given a lot of time and space to play with movement, they often improve their motor skills.  When a baby first learns to crawl her coordination may be awkward, but if given time, space, and hands-on cues, she soon crawls very fast across the room and up the stairs.  When given the opportunity to learn each motor skill “with expertness” a baby develops strength,   coordination, balance, stability, and ultimately the confidence to “bust a move” on the dance floor.  We see the relationship between the powerful use of the elbows in William’s jive and also in a baby learning the motor skill of rolling.  His ability to keep his knees bent reminds us of a baby learning the motor skill of standing.  The baby transitions from bent to straight legs many times which builds a lot of strength and familiarizes him with the variety of levels possible:  knees very bent, knees bent a little bit, and knees straight.  This is a skill used in most dance forms.  We see William dancing with his legs, his elbows, his fingers, and his smile!  William is confident, coordinated, and courageous! 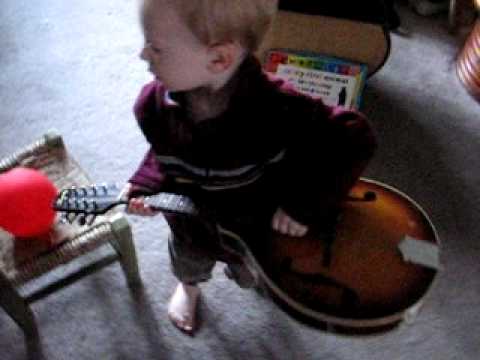 Ivan demonstrates in the above video that not only do infants enjoy the sensation of motion that is perceived by the vestibular system, but so do toddlers.  In his “Mandolin Dance,” Ivan spins around and around and when he stops he bounces up and down while dancing with some quick footwork.  The physical feeling of movement that babies and toddlers receive from the vestibular system while spinning around or bouncing up and down is clearly enjoyable!  Ivan is 21 months in this video, from the IvanChannel on Youtube.  He started receiving Stellar Caterpillar lessons at the age of three weeks.  During infancy the vestibular sensations produced by the baby come from the motor skills such as lifting the head, rolling, and crawling.  Once baby enters toddlerhood, he produces vestibular stimulation from actions such as bouncing, spinning, and running, which is why they all love dancing so much!  Ivan demonstrates quite a bit of skill  in his toddler dance.  He manages to turn around quickly in one tiny spot on the floor while holding the mandolin, and that makes him one of our superstars!